The MMT (Market Model Typology) Initiative is a collaborative effort established by a broad range of industry participants (trading/reporting venues, data vendors and buy/sell side participants). The initiative is committed to achieving a practical and common solution for standards on post-trade data across all asset classes subject to MIFID II.

The initiative unites a variety of industry participants in the basic belief that we can and should act without any further delay to improve the consistency and comparability of data from different sources.

Currently this is a pan-European wide project and is focusing on the MIFID II Trade reporting flag requirements (although it covers more than just the MIFID II fields).

MMT in its raw form is a string of 14 characters (it started out as an 8 character string in version1) where each placing in the text string indicates a characteristic of a trade, and the value in that placing then tells you the specific attribute for that characteristic ie the first position is reserved for the trading mechanism the trade was conducting in, eg a "1" in the first position means the trade was conducted in a central limit order book.

The current version of MMT is V3.04, and you can find the full details on the FIX MMT website here

In Elektron we carry the MMT efficient coding option value in the below field:

Some examples of RICs that currently process the MMT_CLASS field, with trade values.

This should be populated with the exact full length of the version number of MMT the RIC is using. For example we currently have:

The MMT string is intended for application/machine consumption as the string is not always intuitive at first glance. To help with this there is also a subsequent display code alongside the string that is intended to be more for desktop/display consumption, although this isnt carried over our realtime Elektron, it is available in the Eikon desktop.

How can I understand MMT?

As stated the MMT efficient coding string is made up of 14 characters. Each position in the string represents a trade characteristic and then the character in that position provides the detail.

There is a lot of documentation on the FIX MMT website here to help to understand what each of these different positions and characters mean. Some examples are below.

A trade that has the following MMT string can be decoded using the different levels below:

For example, a trade that has the following MMT can be decoded as the below levels:

There are two characters that are important to understand:

1. "-" which means that this level doesnt apply to the trade - effectively a default value.

2. "?" In some cases it may not be possible to identify every single MMT level. Due in part because of a lack of info from the source of the trade. While every effort needs to be made to determine every level, for those cases where a level cant be derived from the underlying information of the trade, a question mark "?" will be placed in that position within the MMT string.

For example, for the above trade, if it was not known which mechanism the trade was executed using, the code would look like this:

How does MMT fit into MIFID II?

MMT started off being based off the initial trade flags that came from CESR trade flagging committee. However in 2015 the European Financial Regulator ESMA published its initial document on mandated information that must be included with all trades as part of the MIFID II regulations. Included in that was a set of 21 four character trade flags to describe the characteristics of the trade forming process.

The MMT Technical Committee worked on aligning the MMT flags with the new set of ESMA flags, although it should be noted that the MMT code covers more than just ESMA trade flags. Please see the attached excel sheet, column F shows you the corresponding four character ESMA flag associated with the MMT code.

The table below some examples of MMT code and how that translates into the ESMA four character code:

In this example we can tell from an H in position 11 that the MIFID II flag is ALGO, and a 2 in position 12 shows it to be LRGS 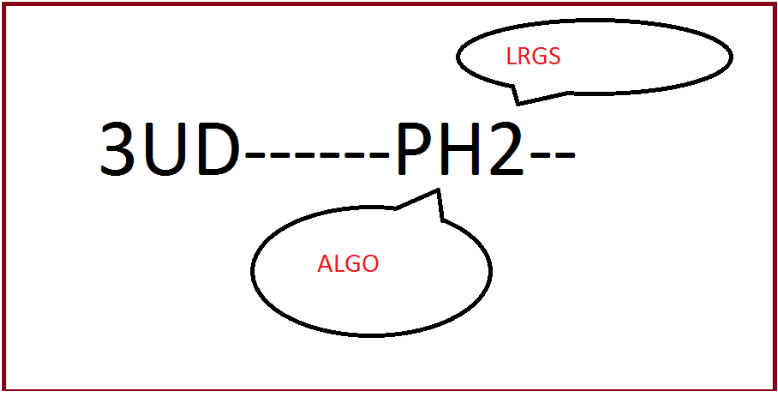 PLEASE NOTE THAT ONLY MMT VERSION V3.0 AND ABOVE IS MIFID II READY.

Below are the ESMA MIFID II Mandated Trade Transparency flags, and the subsequent position and value in the MMT 14 character String. 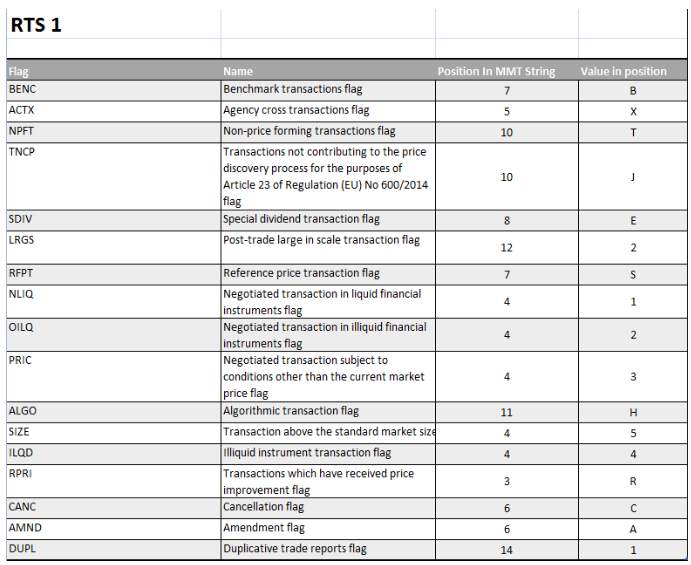 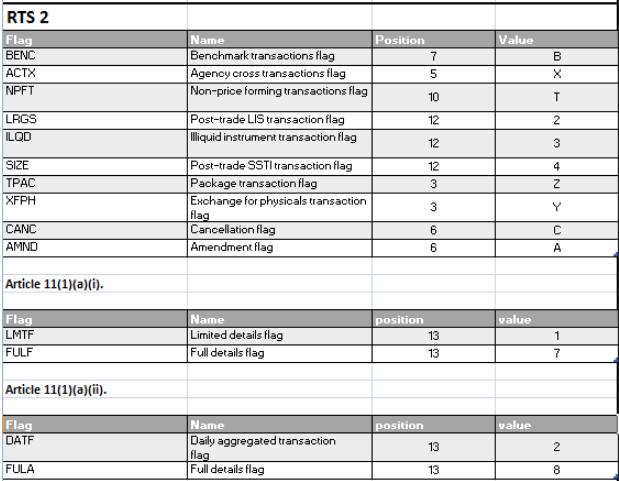 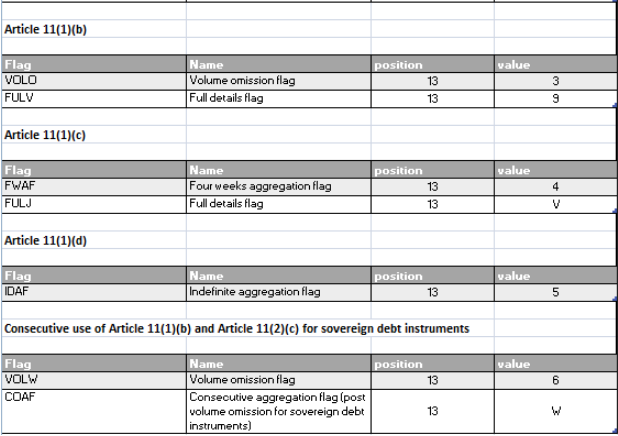 You can view the display only MMT codes in the Eikon Time and Sales view. The MMT display code is mainly made up of the ESMA four character codes, as well as some display codes that are outside of the ESMA MIFID II remit. 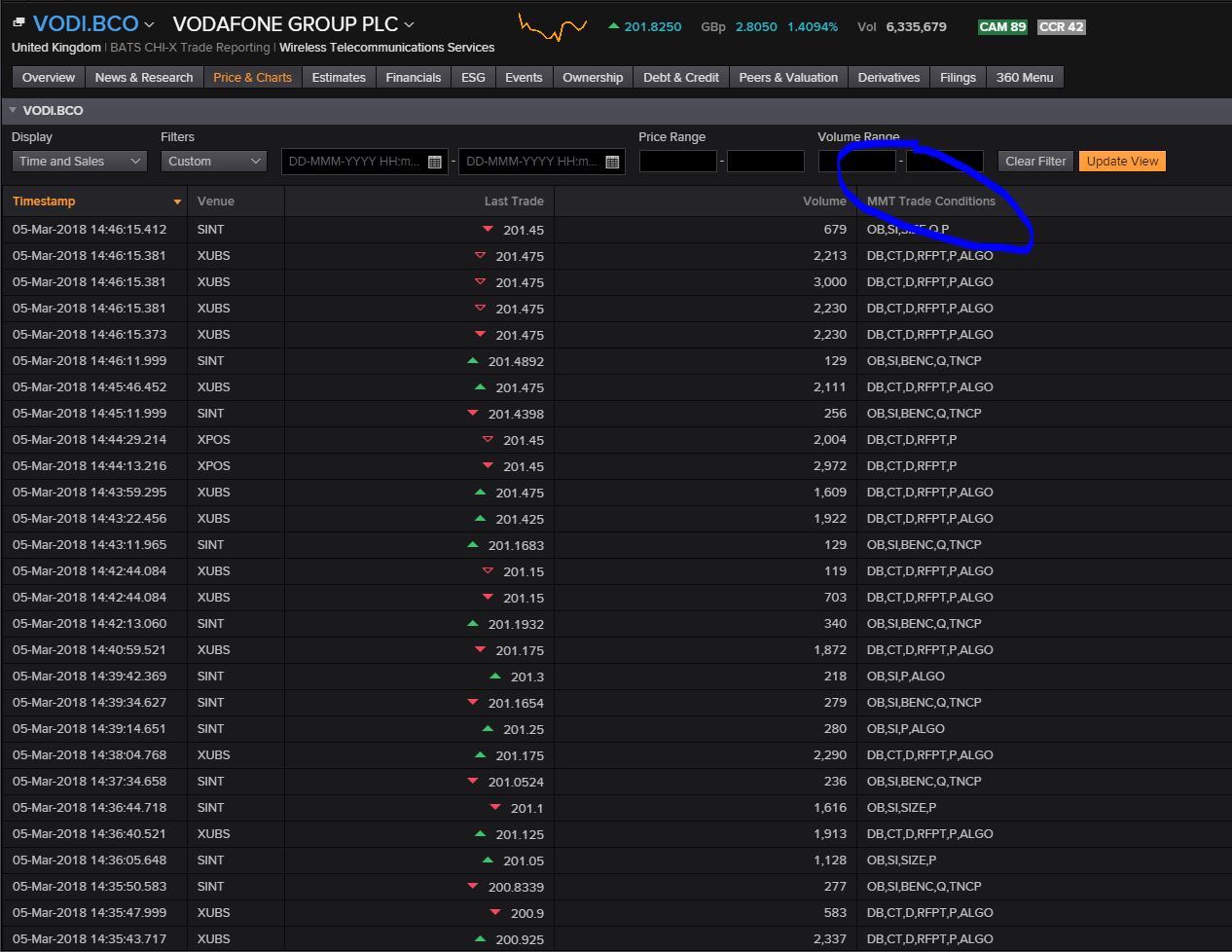 The efficient text string can also be viewed in the older Time and Sales object - column 11 below. 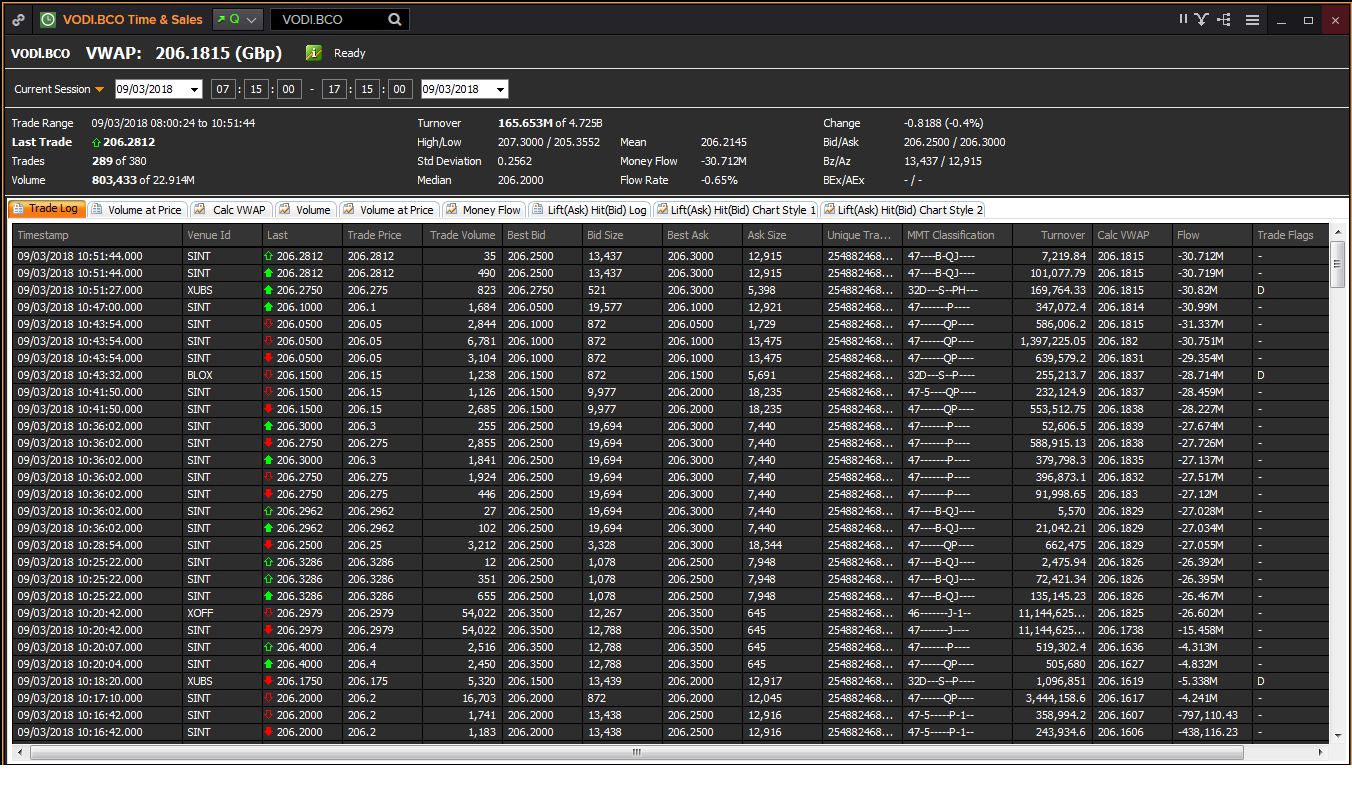 For more information please go to the FIX MMT webiste, where documentation and FAQs are available: MMT • FIX Trading Community